India: The Land of Devotion 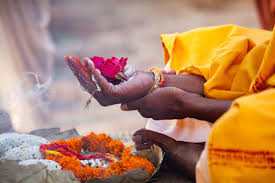 The land of India contains Bhu-Shakti, a sublime power derived from a culture permeated with devotion for millenniums. Historically speaking, India is home to the finest architectural heritage, majestic rivers, the mystical Himalayas with spectacular landscapes and most recently the largest tiger reserve in the world. The tiger or lion is symbolic of the Goddess of protection (Durga) and as many animals, they are considered sacred symbols of Divine-human potentials. The cultural and spiritual diversity that exists in India is unequaled anywhere in the world and has become part of everyday life for over a billion people. Countless truth-seekers have visited India not as tourists but as pilgrims, to uncover the essence that lies beneath the mystery of the soul. India has gifted humanity with epic scriptures like the Mahabharata, Upanishads, and Tantras that provide profound methods for attaining enlightenment, the cornerstone of all major spiritual movements. Most notably India has been recognized as having birthed the widely known and practiced Yoga system and its sister science Ayurveda.

From Yoga came the four paths, namely Bhakti Yoga, Karma Yoga, Jnana Yoga and Raja Yoga and have provided humanity a way to filter through the clouds of ignorance (thoughts, emotions, ego, mind, and intellect) to reach the clear sky of unconditioned consciousness, the abode of Brahman or eternal joy. The basic premise of yoga is that humanity reunites with this eternal love that lies within us. Perhaps the common expression “falling in love” reflects the repeated effort (falls) that cause us all pain and suffering from searching for contentment externally. The promise of Vedic wisdom as taught in yoga is that everything we seek lies within us. As the great American author once said, "What lies behind us and what lies before us are tiny matters compared to what lies within us."

Yoga has been made credible through numerous Vedic seers or rishis such as Vasishtha, the guru of the famed King and yogi Rama of Ayodhya. Vasishtha is one of the seven great Rishis (Saptarishis) of India. Various ancient texts such as Yoga Vashishtha, Vashishtha Samhita and even versions of the Agni and Vishnu Puranas are attributed to him. Vashishtha is best known as the priest and preceptor, teacher of the Ikshvaku king's clan. Agastya is another Vedic rishi who influenced Mahavatar Babaji (Tryambhaknath) a living legend, a maha Siddha, who according to Yogananda and others is still embodied and continues to train yogis in advanced methods of Raja yoga. Vyasa, another great seer, apparently wrote the entire Mahabharata in an uninterrupted two year period of supreme consciousness or Samadhi. Maharishi Patanjali, compiled the vast Yoga tradition into a concise framework (sutras) over two thousand years ago that is still being used today by both notable yoga lineages (sampradayas) and even the commercial postural yoga movement in the Americas and around the world. Patanjali was believed to be the incarnation of Anantha, the thousand-headed serpent king, connecting him to Shiva, Krishna, and Mahavatar Babaji.

India was home of the great Nath yogis of the Himalayas, that devised a practical system of purification rituals (Hatha Yoga) using the body (asanas), breathing exercises (pranayama), dosha cleansing techniques (bandhas) and gestures (mudras). Hatha Yoga has provided a world struggling from mind-body fragmentation, a way to repair the apparent health crisis that has crippled humans for over one thousand years as a result of the dark cycles of consciousness (kali yuga) that ended in 1700. Eventually, as a result of great modern gurus like Ramakrishna, Swami Sivananda, Paramahansa Yogananda and others in this new age of awareness and natural living, the teachings of Vedanta, Samkhya and Yoga became unified as the three expressions of the Vedas and are still very much alive today.

When a sadhaka (aspirant) comes to yoga they must cultivate a new relationship between their mind and body. When a student comes to Ayurveda they must be prepared to embark on a cultural revolution. In a practical sense, this means cultivating a new inner culture that reflects living in harmony with nature and thus learning to see the Divine in all living things. India has been teaching countless individuals how to live a balanced life not merely through superficial scientific theories and principles but through a vast and complex living culture that has sustained the greatest of historical trials and events.

A point I have expressed repeatedly is that practicing Yoga is not enough, especially at a time when the world is in discordance with nature and the modern societal mind lives in disarray, lacking the most basic sense of discipline or understanding of the prime goal of life. In order for yoga to be effective, Ayurveda must be integrated into a person’s life. In other words, one must recognize this living world as Divine. Ayurveda can be defined in a twofold manner, as a healing system that endorses prevention and secondly as a system that teaches us how to restore ourselves (rasayana). This occurs by awakening the inner energies (pranas) that influence the function of the entire mind-body complex, which in turn promotes Ayus or longevity. This can be done through proper diet according to one's constitution, use of herbal formulas and alignment with the seasons. Visit India and your life shall be changed forever, the mountains, rivers, cows, temples filled with devotion, aromas, succulent foods, and amidst much chaos there exists the very sacred the wisdom of Ayurveda and Yoga.

As we become more enthralled by the beauty and the splendor of nature we begin unfolding a part of ourselves we never knew. Living an enchanted life begins with questioning the nature of our existence and a growing recognition that our happiness arises from within our souls and is not limited to material objects. Soulful awareness allows us to recognize that every country, every person and all aspects of nature are born beautiful, however, through the limited capacity of the senses and the ego, resulting in very conditioned consciousness, we destroy the beauty that was once enchanting, by thinking “I” and “We” are separate things. The very essence of living an enchanted life begins with reciprocity. The change we are beginning to see in this world is a result of many people who are giving more and taking less.

The true nature of this world is transient and cannot be completely defined by physical objects, as perceived by the senses. The five elements exist in all things either animate or inanimate. The five great elements also pervade our own physical body and influence all our mental functions. Vedic wisdom traditions teach us how the elements shape our living existence and how we can connect to the One all-pervasive intelligence that sustains this world.

As our understanding of this ideology grows we become more enchanted with life and we learn that money or objects cannot determine our happiness. In yoga, a renunciate is referred to as a sanyasi or one who does not keep any possessions, however, the higher principle behind this is that we must all learn to renunciate or give up on the idea that the material world will bring us ever-lasting happiness.

The Vedas declare that Divine Mother is everywhere, not just as a concept but, as a living force. Simply meaning that, a cosmic or natural intelligence flows through us, creating a Divine and harmonious relationship between our individual spirit and nature. However, through countless births of repeated wrong actions that aim to satisfy the desires of the ego and ignore the higher laws of nature, we block that intelligence that can manifest an enchantment with life.

When we feel enchanted we begin to recognize an ever-growing affinity with all living things. These affinities begin to appear as inquiries into our lifestyle choices that can bring us into closer proximity with nature, her elements and qualities. Our outer nature ultimately reflects our inner nature. Nature slows down our thoughts to the point of a piercing inner reflection that induces a pondering of our life and its purpose. The observer within us repeatedly whispers...”What is this mystery? What has my life become? Is this the life of my dreams and visions or has it become a life of my conditions?

Integral Yoga and Ayurveda are about awakening the light of our consciousness, the cosmic consciousness, and not merely a sensory state of wakefulness. One of yoga’s most charismatic teachers, Krishna, explained this in a two-fold manner as study (jnana) and practice (karma). Basically, this means, study this world as a reflection of your own consciousness and secondly, do something about everything that blocks you “from being In love” as opposed to seeking or trying to find someone or something to love which sounds much like a “fall” in love, rather than arising in love. The dark bird of ignorance begins to fly away as the light of awareness grows integrally. Integral wellness requires managing our lives in a four-fold manner, practically, emotionally, intellectually and spiritually.

If we look around us it becomes very obvious there is a monoculture that aims to wipe out the ancient wisdom traditions. At the same time, there is also a growing global community that is choosing to live compassionately, revering the entire world process as a powerful companion for spiritual evolution. This is the message of India that I pray will awaken in humanity for countless ages. May we all practice Yoga, live Ayurveda and let Divine India take care of the rest.