Expanding the Domain of Silence 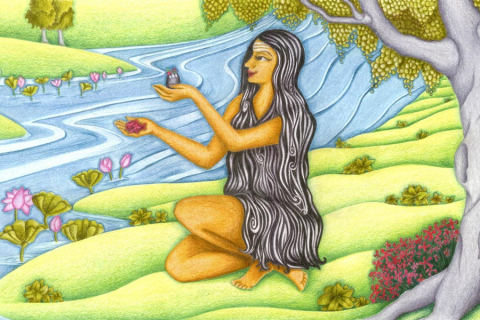 The natural world untouched by humans is permeated with the song of the earth and that of Mother Nature’s five elements. Now, with billions of human inhabitants, the biosphere has been changed and is disrupting the mind's capacity to remain connected to the supermind of Aum. Since global ecosystems have been altered it has placed nature in disarray and thus the subtle frequencies available to humans in nature are more difficult to access. The primal sound found within the natural world mirrors the illumination of the mind and enlivened mind that invokes the presence of the Goddess in her three primary forms as Durga, Lakshmi, and Saraswati. The grandest vibratory sphere is that of the universe as recognized in yoga-Vedanta as the eternal AUM1. All humans are born with a capacity to connect with this realm and choose a pathway that is natural and attractive as per their astrological qualities and which of the four yogas seems the most accessible for opening this door. Once the door is open then the other features of the personality begin to develop naturally, leading the aspirant to an ever new and expanding joy of awareness or Pranava as referred to in Raja Yoga.

As humans continue on their evolutionary journey they begin to live in a more efficient manner and enjoy the sacredness of silence. Silence is also the state of emptiness where the mind is free of thought. As one develops in their evolution they begin to realize and appreciate silence. Silence begins through quieting the need to speak, as one speaks less this allows the mind greater power of reflection and promotes detachment from the senses. Speaking is a result of the air and ether elements (Vayu and akasha) that are controlled by the lungs and vocal cords and the sounds are shaped with the tongue and mouth. The practice of vocal silence is requisite to inner silence and also promotes restoration. One does not realize how exhausting speaking can be until they are ill and naturally they feel more withdrawn to preserve their energy and speak less. Ayurvedically speaking, Vata types chatter, pitta’s interrupt, and Kapha's abstain in a general sense. If you take a moment to listen to most conversations, you can easily witness the three doshas represented. When a pitta type is frustrated or agitated, they will speak at you, and often the volume of their voice is heightened much more than is necessary given the proximity of those they are speaking with. Vata types jump from thought to thought and their conversations flow like a snake, erratic, quick, and unpredictable. Kapha’s are the best listeners, however, their thoughts can get muddled through their speech as the water-earth elements influence heaviness. All these are general considerations that depend on many factors and if a person is in balance. I often recommend my counseling clients to observe how their constitution (mind-body type) influences their speech as another way to learn to better manage these forces as they operate through the mind and body. We want to make the purified intellect or higher mind, the controller of these elemental forces, as opposed to the conditioned consciousness that operates through the ego. Eventually, as silence is enjoyed within, one seeks to be with people and in spaces that honor and cultivate a serene atmosphere. The noisier space is further it is from serenity. Ultimately, as an aspirant attains that Divine connection with the supreme supplier of peace it will not matter much where one goes, that consciousness becomes perennial and becomes the attractive source that all seek. Silence is like a magnet that attracts equal energy just as chatter and gossip attract other chatter bugs. Meditation is a wonderful practice that teaches us to learn how to enjoy the serenity that is within.

The supreme domain of silence exists within us as the indwelling atman (indwelling Self). When the yogi learns through the control of the mind to withdraw the mind from the five senses the inner journey begins and thus the aspirant experiences the initial transcendence of consciousness towards the inner world. This primary phase begins to render the ego powerless along with its typical debilitating features of raga (attraction) and dwesha (repulsion). Contact with one’s inner domain of silence is a boon to the mind, providing it greater control over the afflictions imposed upon the mind as a result of lifetimes of karma influenced by tamas (ignorance) and rajas (restless activity). The domain of silence or Mauna provides unlimited serenity, contentment, and intuition to guide a person to aspire to the heights of evolution.

The power of the Goddess is discovered in the inner realm of silence. The Divine feminine is represented beautifully in nature, animals, and the remarkable creativity that exists in humanity, although much of this outward energy is misused and often lacks meaning and purpose behind the actions. The inner relationship with the Divine feminine gives meaning and purpose to life and her connection brings us to perform our actions as Yoganandaji puts it in a “calmly active, actively calm” manner. A calm attitude connects the aspirant to Mother Durga’s protective and courageous power, to Mother Lakshmi’s gifts of spiritual virtues and Saraswati helps us to gain great understanding and the deeper meaning of life’s experiences. Their powers exist in all human beings although most likely dormant in many, they are accessible to all who begin to embrace the paths of silence through actions as service towards others (karma), selflessly help others in even the most menial of tasks. As devotion and compassion, worship her presence in all living things as Bhakti yoga, as the piercing and discerning wisdom of Jnana yoga and attain the supreme will power and adhere to a life that leads to liberation as delivered by Raja yoga. Divine Mother is active in all aspects of the world thus is encouraging us to listen to her messages as she wants us to learn from what one is capable of witness. After recognizing her sweet message, it invokes a sweet form of love and compassion that allows us to flow like the river that moves towards the ocean of infinite bliss. Even though her messages are subtle they are truly profound in what they amount to over a lifetime of walking with her and embracing her Divine presence.